Moore has Oldham in his play-off sights 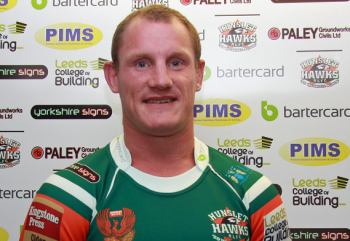 The winners of tomorrow’s game will take on league leaders York City Knights – who have a Week One bye in the five-club play-off series – and Moore believes everyone knows what is expected of them to get the job done.

“I remember Scott Naylor from my Bradford days and he’ll have his side fired up,” said Moore. “We’ve got some quality players in the Hunslet squad and I’m confident we can handle what Oldham will throw at us on Friday.

“To get a home tie is a huge advantage and I really enjoy playing at our stadium. I remember playing here when I represented Yorkshire schoolboys and ever since then it has been a favourite of mine so I’m excited for Friday night.

“I know the winner of this game will go on to meet York and they’ve been the team to beat this year. My first game for Hunslet was against them and I was impressed with how we performed that day.

“I had the option to join York but chose the Hawks instead because I knew I could slot into this team, learn the plays and help them gain promotion.”

Former Super League forward Moore has been impressed with what he has seen so far at Hunslet and is confident the Hawks can push on and make the step up to the Championship next season.

“It felt strange at first playing in this league and being able to have longer game time,” said Moore. “It’s really encouraging to see all the younger lads developing their skills and competing against each other at this grade. Hopefully some of them can catch the eye of the bigger clubs.

“James Coyle and Thomas Coyle are fantastic at directing play and ordering us around the pitch. When they’re missing you can usually tell so it helps to have them out there.

“David March and Liam Mackay have had a stand-out season too. They work hard for us and if they are both 100 per cent on Friday then I reckon they will cause Oldham a few problems.

“It’s going to be a great occasion and I’m really looking forward to getting out there and helping Hunslet make the final.”

Tickets for the Kingstone Press Championship One play-off, Hunslet Hawks v Oldham at South Leeds Stadium on Friday September 12 (8.00pm) can be purchased from as little as £12 for adults, £8 for concessions and £2 for under-16s.

Tickets for the 2014 Kingstone Press Championships Finals Day at Headingley Carnegie Stadium on Sunday October 5 are on sale now and are priced from £17 for adults and £10 for concessions. Book your tickets by visiting www.rugbyleaguetickets.co.uk or call 0844 856 1113.