Mvududu commits future to the club 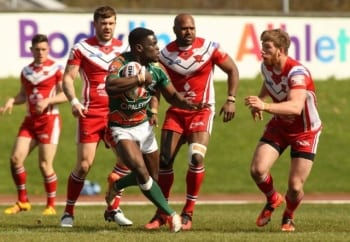 Hunslet RLFC can today announce that Mufaro Mvududu has signed a 12-month contract extension keeping him at the South Leeds Stadium for the 2017 season.

Mufaro is a 25 year old centre who joined the club from London Skolars in 2015, he had an impressive opening season making 15 appearances in 2015 scoring 2 tries.

Mufaro signed a contract extension at the start of this year’s campaign and has gone on to have his best year in a Hunslet shirt, making the left centre position his own and adding some real quality to our left hand side attack. He made a total of 23 appearances scoring 9 tries.

Muffy as he is know at the club is sponsored by Ex Parkside Players Association, has made 38 appearances for the club scoring 11 tries.

Mufaro commented “I’m really happy to have signed a contract extension, having spoken to Coyley and Daz it was an obvious choice for me.

“The thoughts and ideas they have for the club really impressed me and im looking forward to working with Coyley to further improve my game.

“The culture and togetherness at the club is massive which is one of the main reasons I’ve decided stay with the club; not to mention the future at Hunslet looks really exciting and positive at the moment;

Director of Rugby Darren Williams said “Mufaro really kicked on in 2016 as he cemented his place in the team and had a consistent year.

“His performances were noted by rival clubs but he is settled here at South Leeds and with the close knit group we have on board for 2017 if was always his preferred option to stay.

“Hopefully his performances will continue to improve and we can both kick on again together in 2017 and have a successful year.”