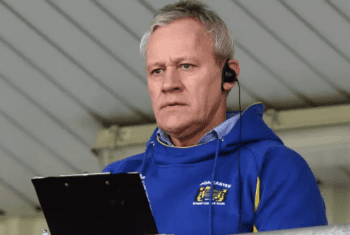 Thornton was appointed last Friday, less than three weeks after being sacked by Hunslet’s Kingstone Press League One rivals Doncaster.

He replaces James Coyle who joined Hunslet in the off-season, but was axed on May 16 following a shock loss to Oxford.

Thornton took training for the first time on Tuesday and will make his debut as team boss when Hunslet visit Barrow Raiders tomorrow.

“I wasn’t expecting to be shown the door at Doncaster to be honest, but then to be offered an opportunity to get back into the game as quickly as this was too good to turn down.

“I’m delighted to get this opportunity and to be back in the game. I love coaching and you can be out of the game a long time.

“I am keen to get stuck in and prove a few people wrong and I am looking forward to getting my feet under the table.”

Hunslet are fifth in League One, one place behind Doncaster and Thornton is going into the role with his eyes open.

“I’ve got a bit of background on the squad,” he said.

“I reviewed the other League One teams when I was at Doncaster so I’ve seen most of Hunslet’s games and I know a lot of the squad.

“There’s some good players here and a good blend of youth and experience.

“We played them at Doncaster early in the season and it was a narrow victory, but they played well that day.

“I’ll have to look at the strengths and weaknesses.

“But, the nines and the pivots are good – I coached Jack [Lee] at York and George [Flanagan] at Batley.

“Danny Ansell’s been around a bit, Joe Sanderson is highly-rated and I coached Joel Gibson at Castleford.

“Jimmy Watson, the full-back, has been a good player at this level for a number of years so the pivotal positions look reasonably strong and the pack of forwards is good.

“Michael Haley has been around a number of years, Lewis Reed has come on well and I like Nyle Flynn, who they [Hunslet] signed from Leeds under-19s.

“He has got potential, so there’s a good squad of players there and I am looking forward to working with them.”

The former Batley Bulldogs boss, who also had spells in charge of Castleford Tigers under-19s and York City Knights, has signed a contract until the end of the season He said he will make changes, but it is likely to be a case of evolution rather than revolution owing to the time frame.

“This week we won’t be able to change too much,” Thornton admitted.

“I’ll just have to have a look and assess things. It wouldn’t be right to make too many changes ahead of such a big game as Barrow away.

“I have some idea of what I can improve and change, but we’ll have to do it over time rather than one week.”