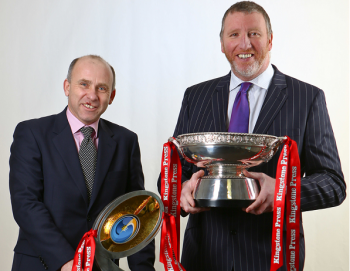 The Kingstone Press Championships Finals Day on Sunday October 5 promises to be a fun-filled day for fans making the trip to Headingley Carnegie Stadium.

Featuring three top quality games, including the hotly-anticipated Kingstone Press Championship Grand Final, fans will also be entertained off the field with a host of activities to enjoy.

The Kingstone Press Fan Zone will see supporters taking part in various challenges to put themselves in with a chance of winning a Rugby League-themed weekend away, or two tickets to this year’s First Utility Super League Grand Final.

Keeping the crowd lively will be music from Farra, a popular band who have supported famous musicians on tour such as Jessie J, Rita Ora and Ollie Murs. The Rugby League Rockettes cheerleaders and community dance groups will also be on hand to keep the energy levels high in the stands.

The competitiveness of the Kingstone Press Championships this year has reached an all-time high with a number of teams still involved in a close play-offs series competing for those final places.

RFL Chief Operating Officer Ralph Rimmer said: “Kingstone Press Championships Finals Day is a hugely popular day in the Rugby League calendar with many fans rightly seeing it as an opportunity to celebrate the excellence that we have come to expect from both competitions.

“The quality on show in each league has been magnificent this year and every player in Championship and Championship One, not just those who will battle it out for honours at Headingley, should be proud of themselves for what they have achieved in 2014.

“I urge all Rugby League fans to come and be a part of this special occasion and make it memorable one for all involved.”

Gordon Johncox, managing director of Kingstone Press, said: “At Kingstone Press we are really looking forward to Championships Finals Day.  We have lots of exciting activity taking place to ensure it will be a proper day out for everyone.

“Our Fan Zone, at the St Michael’s Lane entrance, will keep supporters entertained throughout the day, with activity such as music from band Farra, and our interactive cyclone games to get that competitive spirit going.  All of this, along with some cracking sport is sure to make the day an electrifying end to the season.”