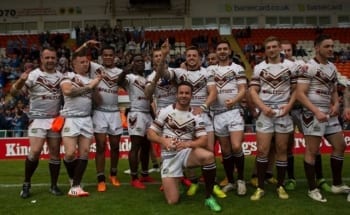 Over 15,000 fans flocked to Blackpool for the first ever Summer Bash to watch two days of spectacular Kingstone Press Championship action and an enthralling iPro Sport Cup final at Bloomfield Road.

15,381 Rugby League supporters were captivated by seven exciting games that highlighted the skill and entertainment the Championship and League 1 have to offer.

North Wales Crusaders were victorious in the first ever iPro Sport Cup final beating Swinton Lions 14-8 in an action packed game that left spectators on the edge of their seats.

RFL Chief Executive Nigel Wood said; “Summer Bash has been an event that the whole sport should feel proud of, it has been a fantastic weekend showcasing the Kingstone Press Championship and League 1.

“I would like to thank the fans who turned out in their thousands to create a carnival atmosphere both inside and outside the stadium, they have really embraced the new concept and helped make the event a great success. Congratulations must go to North Wales Crusaders on their spectacular win in the iPro Sport Cup final.

“For the fans who couldn’t make it to Bloomfield Road they were able to enjoy the high quality drama on the field by watching the great coverage Sky Sports provided over the weekend.

“I am looking forward to next year’s event and we will confirm the date and venue in due course.”

A full evaluation of Summer Bash will now take place with all stakeholders.