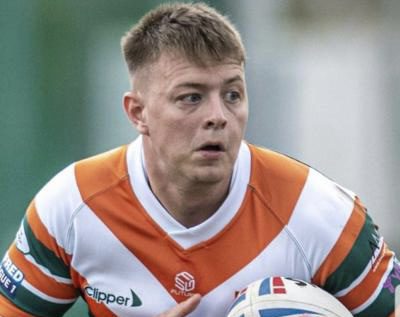 The goalkicking halfback, who has joined the Parksiders on loan until the end of the season, is making a welcome return to the South Leeds Stadium, having enjoyed a successful spell – also on loan – last year.

And he is not only renewing acquaintance with former Hunslet team-mates; he will also be lining up with centre Jacob Doyle and forward Joe Summers, who he played alongside in Featherstone Rovers’ AB Sundecks 1895 Final triumph at Wembley last year.

The 22-year-old, who has Super League experience with Castleford Tigers in addition to enjoying a stint with Doncaster in 2021, said: “It’s great to be back at Hunslet after last season turned out to be a bit of a non-starter for me at the South Leeds Stadium.

“I played in a couple of pre-season friendlies and in the first league game but injured my quad and had to return to my parent club, Featherstone. So it’s about unfinished business for me, after not having experienced the club properly.

“I’m aiming to make an impact, help us make the play-offs (there are plenty of points up for grabs for us over the next few weeks) and taking it from there.”

Hunslet’s supporters are, despite Sweeting’s limited opportunities last year, well aware of his capabilities, many vividly recalling the 80-metre try he scored for Featherstone against the Parksiders in the first minute of the Betfred Challenge Cup tie between the sides in 2020. Kilshaw said: “Jake had a fantastic back-end of the season last year and went viral with his conversion off the touchline against Keighley. He also played very well in the play-off game with us last season, scoring an interception and kicking very well that day.”

He reflected: “He has not been given the opportunities recently in a struggling side but he is now being given a chance to kick on again, featuring with us week-in, week-out. He can certainly play; he has a superb kicking game, he backs himself with the ball, and he can lay on opportunities for others.

“We have been in the market for a halfback and had agreed this deal prior to last Sunday’s game so, with Sandy’s injury, the timing couldn’t have been better.”