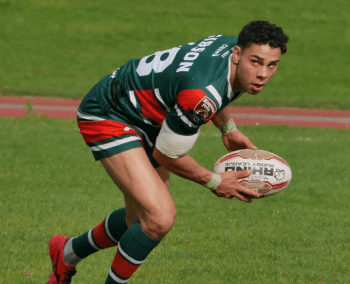 Hunslet RLFC can today announce the re-signing of talented half-back Joel Gibson on a 12-month contract.

Joel, 27, who is the son of former GB international Carl, joined the club at the start of the 2016 season from amateur side Thornhill Trojans and went on to play a pivotal role in helping the club to go on and win the League 1 Shield.

He made a total of 16 appearances in his semi-professional debut season, scoring 4 tries.

Gary Thornton was delighted to re-sign Joel; “Joel had a good first season at League 1 level, and I’m pleased he is returning for another season.

“He was a popular member of last year’s squad and is an exciting player to watch.

“He is a very skilful, talented player with so much potential, and I feel there is still much more to come from him.

“He is very quick to exploit a gap with the pace to go through it, and can provide a spark out of nothing with his footwork and is difficult to defend against.

“He’s a naturally fit lad, with the ability to play a number of positions in the back line, so will be a big asset.

“I think we will see more of Joel’s ability next season, and he will benefit from the squad we have built and be a big contributor to our plans for next season.”

Joel was delighted to have re-signed for another 12–months; “I’m very happy to have signed another 12 months at Hunslet. It was a goal of mine to secure a contract last season.

“The fans, the coaching staff and back room staff are fantastic and made the decision easy for me.

“The squad that Gary is putting together is looking very good and I can’t wait to get started.”