The Summer Bash is coming to Blackpool! 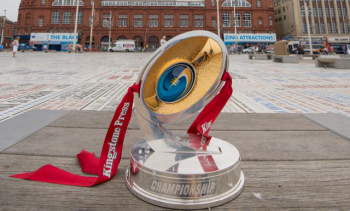 The world’s most famous seaside resort will rock to the planet’s most exciting sport next summer when Bloomfield Road hosts a full round of Kingstone Press Championship fixtures over two action-packed days.

The Kingstone Press Championship Summer Bash will take place over the Bank Holiday weekend, Saturday May 23 and Sunday May 24, 2015, and features a compelling series of events and activities to keep the whole family entertained.

As well as three matches on each day, the Summer Bash will bring the same party atmosphere to Blackpool that Super League fans have enjoyed at Magic Weekend over the last few years with live music, a Fanzone, social media interactions and on-pitch entertainment.

The Summer Bash is a new addition to the Championship calendar and has been introduced as part of the exciting league restructuring that will see the top two divisions each feature 12 clubs from 2015 onwards.

The world famous seaside resort created magical memories for Championship fans between 2005 and 2012 when it staged the Northern Rail Cup and the Summer Bash is expected to become a popular feature of the Championship calendar.

RFL Chief Operating Officer Ralph Rimmer said: “We are delighted to announce that the Kingstone Press Championship will head to Blackpool for the Summer Bash in 2015.

“The Summer Bash will be a fantastic addition to the new-look Championship and I am sure fans of all the clubs involved will embrace the concept and take the opportunity to spend a magical weekend at the seaside.

“With so much accommodation choice for every Rugby League fan over the Bank Holiday Weekend, Blackpool is the perfect destination for the Summer Bash.

“Blackpool has provided the backdrop to some epic Rugby League matches down the years and the restoration of promotion and relegation from 2015, when every minute of every game matters, will produce drama of the highest quality.”

Glen Friel, Sales and Marketing Director of Championship title sponsors Kingstone Press, said: “It’s great that a full round of Kingstone Press Championship fixtures are to be staged in Blackpool over what will be a fantastic weekend for the whole competition.

“At Kingstone Press we are committed to supporting Rugby League clubs, players and fans alike.

“We are already looking forward to Blackpool in 2015 and working on ways we can help make this an excellent weekend for all involved.”

The 2015 Kingstone Press Championship Summer Bash fixtures, and details of ticket prices and availability, will be announced later this year.

The 2014 Kingstone Press Championship season climaxes at Headingley Carnegie Stadium on Sunday October 5 when the Grand Final brings the curtain down on a memorable finals day. Tickets are priced from £17 for adults and £10 for concessions. Book your tickets by visiting www.rugbyleaguetickets.co.uk or calling the Rugby League ticket hotline on 0844 856 1113