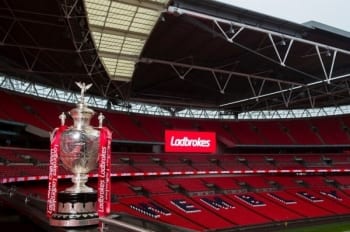 Wigan Warriors ace and Challenge Cup winner Sam Tomkins and footballer Joey Barton will conduct the fifth round draw of the 2016 Ladbrokes Challenge Cup live on Sportsday on the BBC News Channel between 6.30pm-6.45pm on Tuesday March 22.

Last season’s finalists Hull Kingston Rovers will join Salford Red Devils, Wakefield Trinity Wildcats and Widnes Vikings in the fifth round having finished in the bottom four of the First Utility Super League in 2015.

They will join the winners of this weekend’s fourth round matches, which include community sides Featherstone Lions and Lock Lane, who play each other this Saturday.

Tomkins, who re-joined Wigan following a two-year stint in the NRL with New Zealand Warriors, won the Cup in 2011 and 2013 during his first spell at the club he’s made over 100 appearances for.

Current Burnley FC midfielder Barton, who played in the top flight of English football with Manchester City and Newcastle United, is a huge fan of Rugby League, and has attended numerous Super League matches.

All fifth round ties will be played over the weekend of April 16-17, with one game selected to be televised by Sky Sports on Saturday 16th April (kick off 5pm).

Tickets for the 2016 Ladbrokes Challenge Cup final at Wembley Stadium on Saturday August 27 start from £20 and can be purchased by visiting www.rugby-league.com/tickets or by calling the RFL Ticket Hotline on 0844 856 1113.

The full schedule for the fourth round of the 2016 Ladbrokes Challenge Cup is as follows:

Toulouse Olympique XIII vs University of Gloucestershire All Golds (3.30pm)