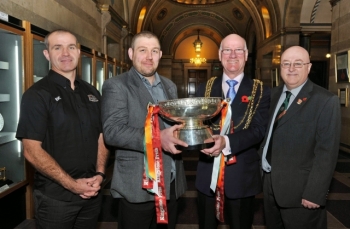 The Hunslet Hawks have been recognised for their fantastic achievements in 2014 with a special civic reception hosted by the Lord Mayor of Leeds, Councillor David Congreve.

In a memorable night at Leeds Civic Hall, players, management and staff from the south Leeds rugby league club along with special guests, met with the Lord Mayor, who on behalf of the city, passed on his congratulations after their nail biting 17-16 victory over Oldham in the Championship One Grand Final.

The Lord Mayor of Leeds, Councillor David Congreve said: “It has been another memorable year for sport in our city, and it was fantastic to welcome the Hunslet Hawks to the Civic Hall in recognition of their brilliant triumph in the rugby league Championship One Grand Final.

“The Hawks showed great skill and nerves of steel to claim their Grand Final success, and I certainly wish them all the best for next season which we all hope will be just as successful.”