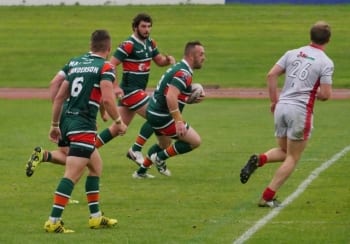 Hunslet RLFC can today announce that experienced forward Michael Haley has signed a 12-month contract extension keeping him at the club for the 2018 season.

Middleton-born Haley, 30, began his career at Leeds Rhinos and played for Doncaster, Sheffield Eagles and Featherstone Rovers before joining Hunslet in 2013.

Michael, who is a firm favourite with the clubs supporters for his never say die attitude and great go forward was a part of our 2014 Grand Final winning team and played a big part in the club going on to win the League 1 Shield last season. He has made 94 appearances for the club scoring 5 tries and will be looking to break the 100 appearance mark in 2018.

Gary Thornton was delighted to keep hold of one of his experienced forwards; “I’m delighted that Mickey is having another season with us.

“He was really good for us in the playoff series last season, and helped our young front rowers develop too.

“He has great experience and has been a loyal servant to Hunslet in the past.

“As I’ve said before, it is as important to reward current and loyal squad members as well as bringing in new players and Mickey was definitely one we wanted to keep.

“He’s probably getting to the twilight of his career, but still has so much to offer with his great go forward and solid defence in the middle unit.

“We have built a tough pack of forwards and Mickey will play a huge part for us.”

Michael was equally pleased to be staying on at the South Leeds Stadium; “I am really enjoying my time at Hunslet, I have been at the club for over 5 years now and it feels like home.

“After the disappointment of last season in not making the playoffs, I’m looking forward to playing my part in making 2018 a successful season for the club”

“Our loyal fans deserve some success and we will be doing all we can to try and make the play-offs.”