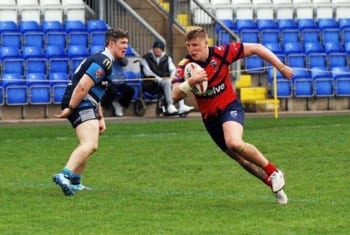 Hunslet RLFC can today announce the signing of goal kicking centre / back row forward Will Cooke from Oxford RL.

Will, 20, is a product of the Castleford Tigers academy system. After a short spell with Huddersfield Giants he returned to the Castleford Academy for a further two years before signing for Oxford at the start of the 2016 season. He ended 2016 playing Rugby Union for Harrogate.

Gary Thornton was pleased to give Will his opportunity; “Will joins us looking for an opportunity to cement a place in the team.

“He has a good rugby league pedigree and came through the Castleford Tigers Academy. Like many players leaving academy football, he was looking to progress his career at first team level, and spent a period of time at Oxford last season, where ex-coach Tim Rumford recommended him to me following some really good performances for them.

“He is a big powerful centre or back row, and provides more competition for places.

“He had offers from other League 1 clubs, but being a very confident young man, he chose Hunslet despite us having built up a strong squad.

“I’m sure he will be backing himself and will push the more experienced players all the way in pre-season.”

“I feel like there is a really strong team been put together for this year and there’s a great feeling amongst all the boys, which I’m excited to be part of and hopefully add something too.

“I am really looking forward to getting stuck into pre-season and for the season to come around and hopefully the boys meet the expectations the club has set for the year and do all the fans and club proud.”