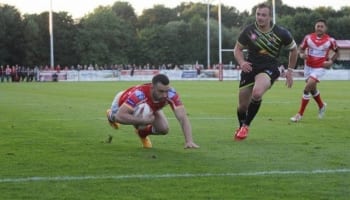 Nathan, 27, is a centre / second-row forward with pace to burn and has a proven try scoring record at Championship level. He began his career at Newsome Panthers at the age of seven where he played until he signed at Huddersfield Giants aged seventeen. After three years at the Giants, he had a brief spell at Castleford Tigers before moving to Featherstone Rovers, where he scored 14 tries in 12 appearances.

He then moved to Australia to play in the Canberra Raiders Cup with Goulburn Workers Bulldogs. He played there for two years before returning to England where he signed for Featherstone once again going on to score 7 tries in 12 appearances. Mid way through 2016 Chappell signed for Sheffield Eagles and went on to score 6 tries in 9 appearances before securing a 2 year contract at Oldham Roughyeds. Nathan had 12 months out of the semi-pro game due to personal reasons in 2017.

Chappell has arguably the fastest recorded hat-trick in rugby league (Featherstone v York 73-78), along with old teammate Greg Eden (Castleford v Leigh, minutes 33-38), which are both within a 5-minute period.

Gary Thornton was delighted to sign a proven Championship player; “I’m delighted we have been able to sign a player of Nathans ability and experience.

“He is an established Championship player, having been at Featherstone, Sheffield and Oldham, so has a wealth of experience at the higher level.

“He has also had a stint out in Australia, so his experience will be of huge benefit to us.

“He’s another player who is just as comfortable at centre or back row, so adds more competition for places, and will be a huge addition to our squad.”

Nathan was equally delighted to be signing for the Club; “I’m really excited to have signed for Hunslet, after having a year off.

“I really missed my Rugby League and I’m delighted that Gary has given me the opportunity to play again at semi–pro level, alongside some talented and familiar faces (especially my old mate Muffa).

“The club has high ambitions for the coming season which is something I want to be a part of in pushing for promotion.

“I’m confident we can achieve that goal of promotion, in what’s going to be a very competitive league.”

To sponsor Nathan in 2018 email darren.williams@hunsletrlfc.com