Hunslet left it ‘til late to win an important Good Friday (19 April 2019) clash at the Vestacare Stadium in a topsy-turvy encounter on a blisteringly sunny Lancashire day.

After losing at Whitehaven two weeks ago the South Leeds outfit needed to get back to winning ways to take a grip of their table topping position.

From the off the visitors looked impressive, Ashton and Robinson punching holes in the Oldham defence. On 5 minutes an Oldham mistake from a kick was scooped up by Gareth Potts to score in the right hand corner 0-4.

Ten minutes into the game Oldham got onto the attack, but a poor kick was rounded up by Reece Dean who sprinted 80 yards to give Hunslet a 0-10 lead (Converting his own try).

A Dean penalty made it 0-12, before momentum changed and Oldham started to get on top. This was in part down to Hunslet’s poor discipline and after conceding a penalty Bowman dummied his way over for the home side 6-12.

Hunslet then committed the cardinal sin of kicking the restart straight into touch, inviting more Roughyeds pressure. An Oldham chip kick was not dealt with and the scores were soon level at 12-12.

A strange decision by the home side to kick a penalty on 30 minutes when they were putting Hunslet under immense pressure may have aided the visitors as right on half time Reece Dean levelled up with a kick to make it 14-14 at the break, about right for the half.

Hunslet started the second period well, but a poor attacking kick was taken on the full by Oldham letting them off the hook somewhat. The resulting tap was lightening and on the next tackle Hunslet’s defence was carved open for an early Oldham try. Lady luck looked to be on the home side’s team when the kick bounced in off the post. 20-14.

Now the game became topsy-turvy, Hunslet went close from an astute kick behind Oldham’s defence, before the Roughyeds had a try disallowed for a forward pass (despite a theatrical dive in the corner).

It was Hunslet though, on 60 minutes who went over in the corner. Dale Bloomfield finishing a neat Hunslet move. There was some question of a double movement, but the referee overruled his touch judge. No conversion though 18-20.

The game took a dramatic turn again on 65 minutes when Oldham looked to be seizing control, McComb sliced through Hunslet’s defence like a hot knife through butter and with the conversion Oldham lead 26-18.

Discipline now started to slip for the visitors as they were dragged into niggles and scraps. Mike Emmett was Sin-binned along with an Oldham counterpart, the resulting penalty stretching the home lead to 10 points, and then Hawksworth was sent off for Hunslet, Langtree only getting 10 minutes for the Lancastrians.

With Hunslet trailing by 10 points and down to eleven men it looked a real uphill task, but Hunslet now started to play some of their best Rugby.

Jack Lee slipped a pass to a steamrolling Adam Robinson who was never going to be stopped that close to the line 28-24, and then with 8 minutes to go a break in mid-field from Reece Dean saw Ben Heaton sprinting to the line to give (with the conversion) Hunslet the lead 28-30.

Oldham had some half chances in the dying minutes, but a similar Reece Dean mid-field break and combination passing sent the impressive Ben Heaton over again, much to the delight of the travelling faithful.

The 28-36 victory was in the end deserved with Dean, Nicklas, Heaton, Robinson and the ever dependable Jimmy Watson impressing for the visitors.

Although Whitehaven won the Cumbrian derby and are joint top with Hunslet on 10 points. The Parksiders superior points difference keeps them top of the table.

On this evidence there is no reason Hunslet should not expect silverware this year, they have some excellent players and play some fantastic Rugby, but coach Gary Thornton will have a slight worry over his team’s discipline. Again Hunslet finished with important men off the field.

Hunslet TV speak to Gary Thornton who gives his reaction to the incredible late win. 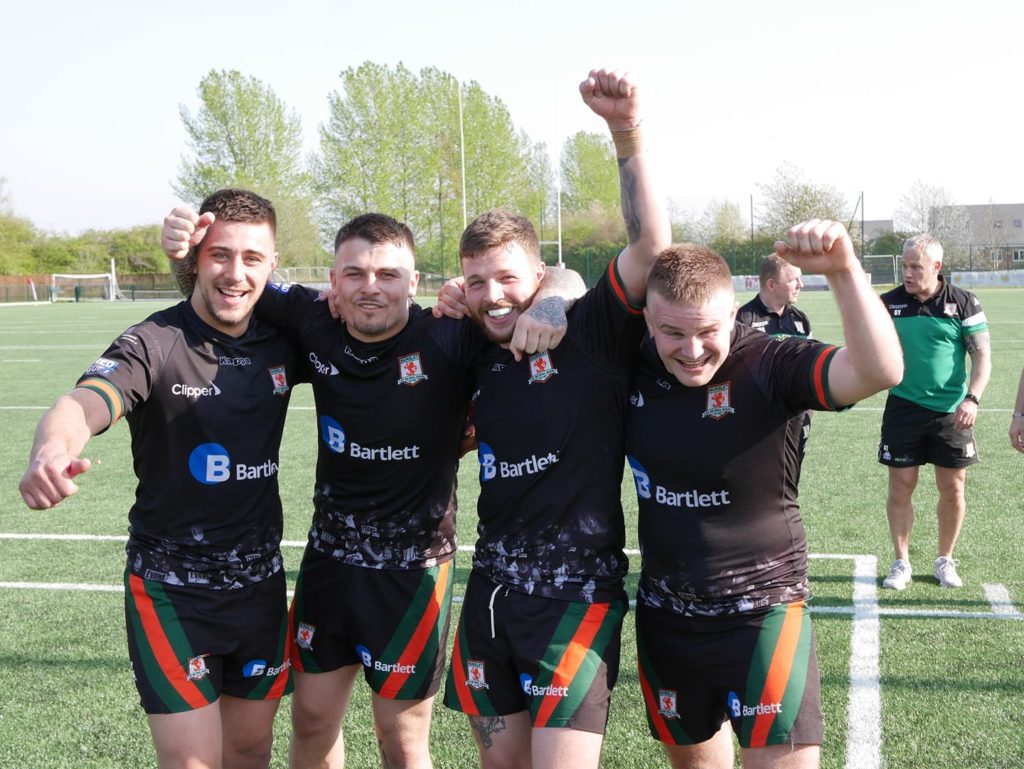