After two successive defeats Hunslet’s chances of getting back to winning ways were dealt a blow in the hot summer sun and heat of the South Leeds Stadium by a resilient Doncaster this afternoon (22 July 2018). 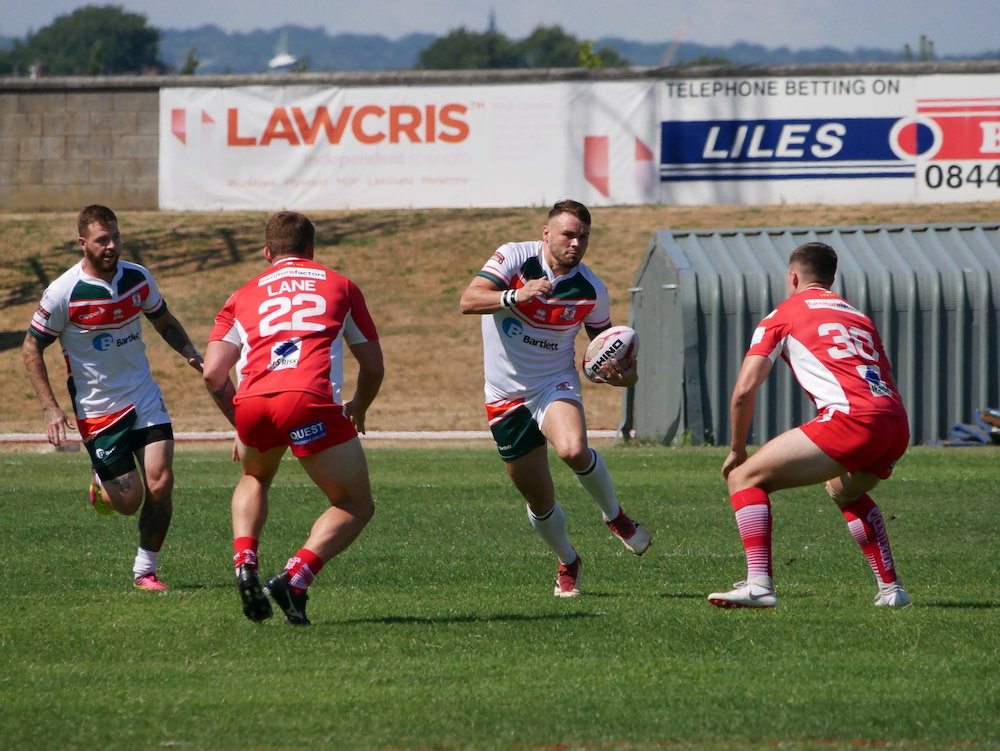 The South Leeds outfit had come away with the spoils in an earlier season clash at the Keepmoat (Doncaster), but it was sweet revenge this afternoon for the South Yorkshire side.

The first 10 minutes though was pretty even as each side vied for the upper hand. After a rare 40/20 Hunslet came close when Tonks hit a ball at pace, but was well tackled. Soon after Watson was held up over the line, but it was Doncaster who scored first when after a period of good possession Scott barged over close to the left upright for a fairly soft try.

Around the 20 minute mark Hunslet started to look more likely, Nicholson released a ball in the tackle to set Foggin–Johnston away down the right. A minute later Hunslet were awarded a penalty and Jack Lee forced his way over. The simple kick tied it up at 6-6.

Doncaster now had Beharrel sin-binned for a high tackle and Hunslet started to take control. Nathan Chappel impressive in the right centre forced his way over for a good try, Sanderson converting brilliantly.

Again, Hunslet came and when Straugheir broke through (he was a handful for Doncaster all day) a try looked on, but the pass to Southernwood was forward.

Hunslet though did get the last points of the half when Sanderson converted a penalty for a high tackle.

The omens did not look good at the start of the second period for the home team as the ball was kicked out on the full, piggy backing Doncaster into a good attacking position.

Not long after, Martin barged his way over and Doncaster were back in the match at 14-12.

Hunslet had plenty of possession but did not seem to be able to click into gear. Simple passes went to ground, kicks went out on the full, and communication between players looked absent. But Doncaster too were not at the races.

This changed at the three-quarter mark though when the visitors sensed a chance of victory. A lightening six tackles took the visitors from their own line to Hunslet’s and Beharrel made his way over to give Doncaster the lead 14-18.

On 62 minutes Tali scored from a break and neat kick through, and on 68 minutes an unlucky bounce foiled Jimmy Watson for Sanderson to score. Both tries were converted and Doncaster had the game wrapped up leading 14-30.

Things got worse for Hunslet as Jimmy Watson was then sin-binned for talking at the referee.

So, on the whole a bad day at the office for Hunslet. Chappel and Straugheir were impressive in the first half and Tonks still ran well in the second, but too many mistakes and not taking chances when on top cost the Myrtle, Flame and Whites.

A tough trip to Keighley next week will tell us how this season is going to go.